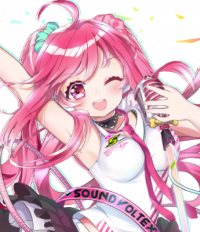 RASIS, as she appears in SOUND VOLTEX VIVID WAVE.

RASIS is one of the main navigator characters in the SOUND VOLTEX series, and also one of its mascots. She is a second-year student at the VOLTE Academy. During the events of SOUND VOLTEX III GRAVITY WARS, she is also the captain of the dreadnought NEMSYS, pursuing and eventually defeating GRACE, who seeked to corrupt the galaxy with her bugs. She now plays an older sister role to GRACE.

As with the other mascot characters, her appearance changes with the release of every SOUND VOLTEX game; her costume is based on the current game's theme (except in GRAVITY WARS, where she had two different costumes). She is characterised by her long pink hair, free spirit, optimism, and a friendly attitude that makes her easy to get along.

In the pop'n music series, she is shown wearing her SOUND VOLTEX II -infinite infection- outfit, and is featured as a rival character in almost every SOUND VOLTEX crossover as part of the FLOOR INFECTION event.

All of RASIS' appearances in pop'n music recycle the same sprite introduced in Sunny Park.