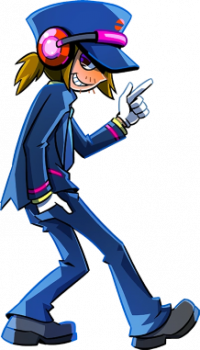 Mr.KK, as he appears in pop'n music peace.

A janitor who cleans a certain building in West Shinjuku every day.
They say he has another side to him, a sniper with the nickname “cleaner”. Is it a secret?

Mr.KK is a West Shinjuku janitor who is also a sniper by the nickname of "cleaner".

He debuted in pop'n music 5 with the song 西新宿清掃曲, the first in the PERCUSSIVE series of songs by Kiyotaka Sugimoto. He became the rival character of every PERCUSSIVE song, with the exception of the related song 西表島琉球曲.