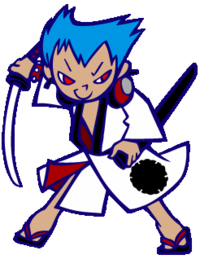 Known to most people as the Hip Rock Samurai, Roku (六) is a rather skilled swordsman who spends his days traveling around all the corners of the world. He's always seen carrying a set of headphones around his neck and a calligraphy brush on hand, which he'll often use to write about all the different things he's seen during his travels in traditional Kanji.

Roku first debuted in pop'n music 6 with the song 大見解, the first in the HIP ROCK series of songs created by Des-ROW. He still remains the rival character for all eight songs within this genre to date.