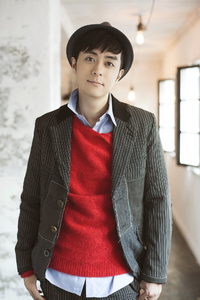 Kenichi Maeyamada, also known as Hyadain (ヒャダイン), is a Japanese musician and music producer affiliated to Five Eighth Inc.. He started his music career in 2007 and mainly produces and provides music for idol groups such as Momoiro Clover Z, Shiritsu Ebisu Chugaku, and Dempagumi.inc.

Since the same year, Kenichi has been doujin working as a utaite in NicoNico, mainly sampling and arranging the BGMs for the Dragon Quest and Final Fantasy series of games. In 2011, he made his major debut with ヒャダインのカカカタ☆カタオモイ-C (Hyadain no Kakakata Kataomoi-C), the opening theme of the anime series Nichijou (日常). Since then, Kenichi has written many anime songs and BGMs, and has released several singles alone or with other artists.

Since July 2011, he has been a member of Stardust Promotion and has appeared in music programs such as music-ru TV (musicる TV) and variety shows such as Gathering in the Pokémon House? (ポケモンの家あつまる?), as well as acting in several drama series.