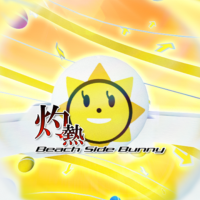 This is my first OMES.

The passion of the tomboyish girl gradually becomes hotter and hotter, reaching a boiling point.

She swings and swings around, eventually rolling around in the sand.

The heat! The summer! The burning sun!
I guess this is everyone's impression of this.

I would assume that Resort Anthem was produced during the summer.

I remember being overwhelmed by crushing heat, then cooling myself off by spraying cold water on my self with a garden hose.

That same feeling was used when making this video.

Both the video and the song come together to make a very satisfying experience.

Finally, I want to congratulate DJ Mass MAD Izm* for his album I AM NOT A DJ!!