This page is for the original Evans by DJ YOSHITAKA. For the arrangement by まらしぃ, please see Evans ～NOSTALGIA Ver. ～. 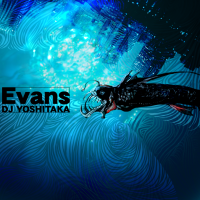