This page is for neu, which appears in pop'n music 15 ADVENTURE. For NEU! by √thumm from jubeat knit, please see NEU!. 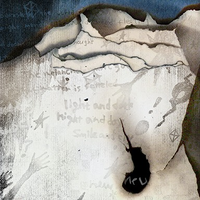 In the gap between light and darkness, I, who was merely nothing, was singing of the end of the world.

Beyond the light and the dark, nothing remains; who would suggest such a thing?

Well, then:
What, exactly, is nothing?

Rather, this is the world of all existence.
Is it, now?
In what way can there be such a thing living without form?
Quite a paradox.

The end of repeating questions and answers
Struggling factions
Before beginnings, and after endings,
Nothing that lives is questioning

In short:
The beginning and the end of the world has been enclosed.
There, everything has been compressed
Paradoxical nothing is born, unquestioning
Surely I really don't know the meaning of this.

In short:
The world, the light, the darkness, the dawn, the dusk, the smiles, the tears, the closing, the music, the game, the Internet, the feelings, your presence, myself, and some other things here and there...
They have been lumped together.
"Everything shall disappear," it was said,
A worn face scolding with fresh emotion
This is a song, a package with everything in it.
As for the flu --
Well, every time I make music, thoughts like that just spring from my head.

Nevertheless,
this feeling is only another of my creations.
There are a lot of feelings put into pop'n 15 as a whole.
Either way, this harsh world is an interesting yet tough place.

With these words,
even if we have something to lose,
Let's give it our all.

Is this a form present in the world? From the joy of light? From the sadness of the dark??
Everything is in it and the small events of past meetings.

It began with the demo song that May that had mixed opinions...
Even when you think you've understood everything,
This is where all of the boss characters originate from.
Emotions that have been present throughout the years pierce through its body
Of water
Of earth
Of fire
From the joy of light
From the sadness of the dark
In this magnificent world, overnight, a shape was formed.
The purpose of its existence was to begin a trip to seek and meet people all over this new world.
It had met MZD in a past encounter - for a small time, he took care of the form.

Take a careful look; it's the size of your palm.