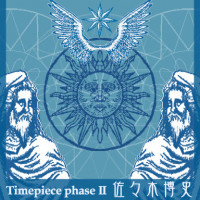 I think it turned out to be a rather light-hearted and cheerful song.

At the time, I was under a lot of pressure to write an ENCORE song, and I was more worried with the game part (charts) than about completing the song.
This may be the reason why each song has a certain unique tension, but this time Asaki took charge of the charts, and I was able to create the music with a refreshed feeling.

I also have the impression that the song "has turned out to be very carefree", but I don't think that's... true.

Hello, this is mito.
I was in charge of porting the movie to the game console.

Mr. Sasaki is back~ with "Timepiece phase II"!
But why "II"?

Putting that aside, have you played it yet?
I don't think it's easy to play it because it's "PREMIUM", after all.
(I can't play it!)

Please try your best and give it a try.

The existence of this song is "one result" that we came up with after thinking about how we could reward the players who have made Gitadora so much fun.
This is one of the results we came up with.

We were also lucky to have the same designer as The Least 100 Sec create the clip to coincide with Sasaki's return.
The conditions for its appearance are quite severe, but as a staff member, we would be happy if you could enjoy it as much as we did.