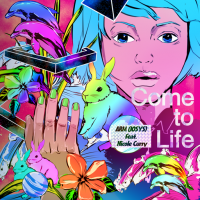 It was my first time to produce a DDR song!

Moreover, I was asked to make a speedy hardcore song!!

With a rising eccentric phrase, I asked for lyrics and singing to an English native speaker, for the first time in my music life!!

Woooooooh your English is the best!! You are cute, Nicole!!

Hey, this is Nicole Curry from Attack the Music.
I am very thankful that I had the privilege to work with ARM and have my vocals on 'Come to Life'.
The feeling I had when singing this song was pure ecstasy.
It really gives you the feeling of freedom and letting go to dance and be yourself.
I hope that everyone who hears it will feel the same enjoyment as I did while singing it.

The first time I heard this song, I had a vivid image of people jumping, getting hyphy in the club.
I'm super nervous and honored to have been asked by ARM to write the lyrics for this song, especially since it's my first time!
I think anyone can relate to being drained from the stress we are put under every day, only to let go of all your troubles in the night and lose yourself in the music.
Hope you enjoy, and let the music free you!