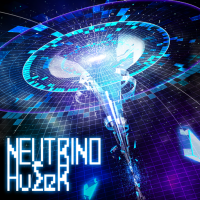 Do you know what a neutrino is?
It is one of the elementary particles that flying around, and it seems that it is too small, requiring a considerably large equipment to observe.
Well, I did not know that at all.

People needs a lot of enthusiasm and effort to observe small particles that are small enough to slip through all the objects in existence, while being present.
Actually, there is a power to move huge amounts of energy in small things.

It is something that you cannot hate, really.

Much like a neutrino, that is too small to be able to shine, if a few seconds of music would quickly pass, how much people could have been affected by them, and how much enthusiasm would they cause on that people?

I thought it would be nice to have a neutrino presence.

This song is the reflection of that.