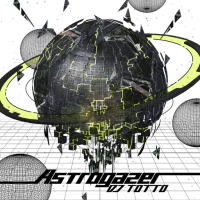 You are here, EDM!
Among the genres in BEMANI, there are already expert artists who are already bringing world class cutting-edge sounds, although BEMANI usually have them to mix up a bit. However, this time, there were strict orders to challenge people who are not EDM experts to do it, so it is impressive that those who seemed unfamiliar with side chain compressors worked all together to complete their works.

This song is the sequel to "Gravigazer" which I wrote for IIDX, with the concept that the "○○gazer" series dared to do something a little different from my safe zone, I think to myself that is an attempt to "create a song for myself by someone like me who is not me".
Yeah, that is what I decided a while ago.

Of course, a full-fledged sound that is completely faithful to the genre is good, but I think that BEMANI is unique in that a defined genre undergoes changes caused by the artists, so I will be pleased if you can enjoy those parts as well.

It's the sequel to Gravigazer, with a spacelike feeling in keeping with the title! And with the orders received, here's the jacket I made!
As a matter of fact, when I was stuck between a black and a white background, not only TOTTO, but also the rest of the staff decided on white.
(What annoying bastards...)


In time, I want to release the Black Ver. to the public somewhere.
But I'm not gonna talk to TOTTO about it (laughs)