Not to be confused with NEW CENTURY GENERATION. 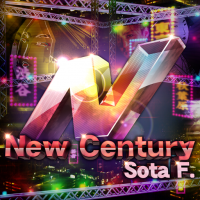 Long time no see. Along with DDR's renewal, I was requested to make a new boss song, and I created a sequel to New Decade. As you know, a Decade is 10 years.
What about 100 years? Century. What about 1000 years? That's Millennium.
The next boss song's title will likely be determined first (laughs)

Because I myself like New Century, I feel like making a long version if I have the opportunity.
Everyone please try to play it. Thank you very much.