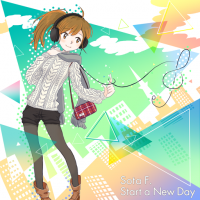 When you listen to positive songs on a sunny day when going to school or commuting, that day will get better.
With that in mind, I made this song.
Please listen to it. Thank you.