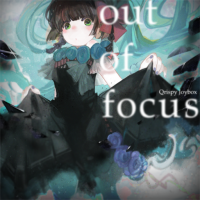 out of focus' jacket.

The thought that I put in this song was "trying hard to get out of the world of blurredness".
Yeah, yeah, try listening with the eyes and ears of your heart, you may feel the thought that was put in it ...

Incidentally, that world of blurredness is similar to when the camera does not focus properly...

Actually, I love cameras!!
I especially love blurring the background, and taking various photos with my favorite monofocal lens 135mm camera with one hand!

Next time I want to show you those photos...