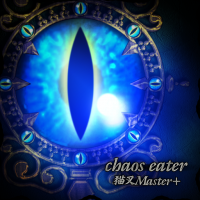 For those who do not know that it means, it means "somebody who eats chaos".

"chaos eater" is the essence of humanity and the universe.
The universe is just one of the cells of life, the more you try to figure it out, the more confusing it becomes, everything is consolidated into the universe.
Afterwards it becomes nothing, and from there, I feel like we were born.

That is this song.
Let's play♥