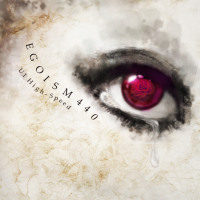 It does not need to become a legend.


It should always make new foundations.

A deep crimson eye shining bright red. A rose reflected in the eye.
My growing desire for that person blurs into tears...
My pure white skin, like a porcelain vessel, is eaten away by the pattern of the rose, because I am thinking of that person day in and day out...

When I was drawing this jacket, I was thinking of such things~ ^^
I feel the woman's obsession in the form of darkly-fringed mascara that bleeds due to the shedding of tears!