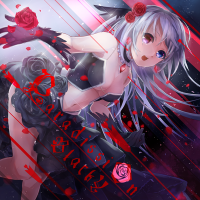 Congratulations on launching MÚSECA!
And thank you for accepting my song! This is BlackY!

The beginning of this song gives off a very energetic, hard trance-like sensation. This time, however, by taking the usual piano and combining it with a very stylish element, it takes on an entirely new life incomparable to all of my previous works up to now. If the genre was named in the style of a music game, ENERGETIC CONTEMPORARY would sound cool, wouldn't it!? ENERCON!! It's very ENERCON-like!!(?)

Speaking of naming, the song's name is called "Paradission".
"Paradise" + "Passion" = "Paradission"!!
Burning with passion, I'd be ecstatic if everyone enjoys this!!

Hello, I am asaya, the one who made the jacket.
I'm truly grateful that I was given the opportunity to work with someone like BlackY.

Discussing the jacket, the elements of roses, hearts, and arrows melding into the form of a woman was the image I thought of when making the artwork.
Since it may not sound very appealing in text, I'm sure it'll be more enjoyable to look at instead. It would be nice if this song and the jacket associated with it managed to pierce and stick close to your own heart.