This page is for the Scotty D. revisits U1 song titled Flow. For other songs of the same title, please see Flow (disambiguation). 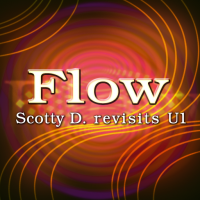 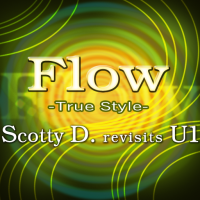 When I first listened to the song and was asked what came to my mind, I couldn't think of anything.
However, I felt a vague presence of something... a very big "something". I didn't know if that "something" was God, the universe, nature, or time.

But that "something" was never human. Conversely, humans such as myself are very small entities. When confronted with something that big, we are a small thing that doesn't stand out at all. But isn't that just too lonely!?

That's why I think, "although we are a small and insignificant existence in the 'flow of this world', which consists of large entities such as the universe, nature, and time, we are here in order to feel and witness that large 'flow of this world'. It is possible to do so, and is exactly proof that it exists because we can feel and witness that flow!"

The opponent that confronts us is the flow that we co-exist with, in other words it is "Flow".

The word "Flow" has several meanings and thoughts...

DanceDanceRevolution difficulty from 1 to 10 from DDRMAX2 to SuperNOVA2, and 1 to 20 from X onwards.
pop'n music difficulty rated from 1 to 43 through pop'n music 20 fantasia, and 1 to 50 from Sunny Park onwards. (Ratings and notecounts obtained from Pop'n Music Fever and BEMANIWiki 2nd.)