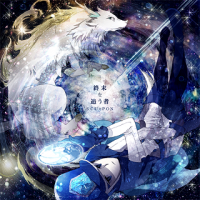 Hello! It's Shoccho, somehow back again for another collaboration! This is the fourth song I've written this year alone.
The time went so fast. In just a few short months, PON and I composed a new song together!
Recently, PON's been doing a lot of vocal work, so we agreed to write something instrumental for a change.
Actually, I'm writing these comments before the song is released, and the anticipation is making me a bit nervous!

Everyone, let's pursue the end together!

When planning our collaboration song, it took a while to figure out what sort of song it should be. We decided to create a hard instrumental 4-beat song.
When dividing the work, we decided that Shoccho would compose the song and I would do the arrangement.

We wanted to create a 4-beat song completely unlike any other 4-beat song. We added sections with unison and irregular timing, and tried to give it the energy of a game soundtrack.
I had a lot of fun discovering how to arrange this song in a unique way.
Collaboration helps you grow as a person! We reached perfect synergy. It's really amazing.

There were many great ideas for this character, and I was put in charge of animating him.
I told myself "Even though there are so many exhausting things happening in my life right now, everyone's counting on me for this, so I need to pull through!"

With his flying disc which gathers the memories of dead stars, it's the top breeder in space, Canopus.
I always try to convey a scene in my character animations, but I had a bit of trouble with this one~;

At first, PON suggested that the character image be "NOVA's rival", but as I worked on the design that relationship slowly disappeared.
Eventually, they became neighbours and friends instead.
"Sorry~ My dog's bothering you again~" "No, no, it's okay~"
In space, even neighbours must live very far apart.

Even though she was on a really tight schedule, jubeat designer T_da helped collaborate on some of the design drafts! Thank you so much~
Canopus and his pet dog look really cool on the jubeat jacket, and I was very happy to see the result.
Be sure to check it out~

The idea for Canopus suddenly came about when chihi and I were having a discussion about sci-fi series.
A legendary breeder who uses his disk to capture the past of dead stars...
...I couldn't help but be captivated by his dignified appearance.
But he hasn't come to Earth yet. Maybe some day!