This page is for the Cait Sith song titled シュレーディンガーの猫. For the Brian the Sun song of the same title, please see Schrodinger no neko (Brian the Sun). 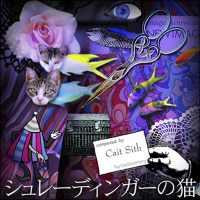 If you hold too much on one thing, you will lose sight of everything, nya

However, when things are considered on the most microscopic level, the behavior of elementary particles is nothing but random.

You encounter the paradox that if you settle on one view, you lose sight of everything else.

That would be the logic of "Schrödinger's Cat" in a nutshell.

In other words, it is up to you to decide how to deal when you encounter something you don't understand.

Do you accept it as a new and incomprehensibly high level of difficulty, or accept it as a relative understanding of the reasons for the other higher difficulty songs? Whether it makes sense to conquer all the songs or not, I'd rather you go out with me if you get a full combo on TOY CONTEMPORARY! Whether to use it as a pick-up line or not...

Because there was never a right answer--

...I wrote this song to encourage everyone to be flexible and have a broader perspective.
This song contains a variety of ideas that can be taken in different ways.
It could be the charts, the tune, the song title and comments, the cat or animal voices....
Overall, the charts were created to be very challenging.
I also incorporated a feeling that has never been seen before in the arrangement, to give the audience a sense of surprise when they first played this song, so I made the tune complex, with rapid changes in development and beat.
However, I mustn't forget that it's a pop'n song, so I made it with the aim of becoming the most fun and crazy boss that I think of in pop'n!

I hope that in many ways, the name of this song will be engraved in the long history of pop'n music.

We received an order from Mr. Cait for a "Dadaist" look, so we took a detour with "Oui, monsieur" and came up from the clouds with a gentleman with Magritte taste.
"It is as beautiful as a chance encounter between a sewing machine on an operating table and a rain umbrella." So please enjoy the poetic and surrealistic world view.
I hope I can also bring out the smoothness of his enchanting hand movements, which is typical of a magician.
He not only does magic, but also tap dances. Mr. Tent is truly a master of his craft.

The circus moves through the city. Very mysterious.
What's going on inside the tent? I want to know. I want to see.
The children's curiosity is excited.
But if you accidentally open the door...
It could be a big, unthinkable deal. Nya.