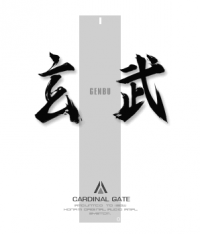 Hello. I'm Kametarou Kameda, who is playing the role of Genbu this time around.
You can't beat me. There's no openings for you at all. After the match I'll stand in the ring and sing "FANTASY" or something. (Today's meme)
"You are a turtle. A slow, clumsy turtle" was the orders I was given, so I became a turtle in body and soul. Sorry, this body was no good.

I worried about lots of things, like if this is fitting for one of the four heavenly kings, so I tried to express a turtle-like strength.

After all, it's a turtle.
It's hard. It's got very high defense. It will reflect all the players' attacks.

After all, it's a turtle.
It lives in the water. It sways to and fro. The patterns represent the flow of water.

After all, it's a turtle.
The second half isn't quite a victory. The rabbit is catching up. This must be what you call "deretsun". (Today's meme)

I thought about things like BPM or density or come on give me a break already but nowadays there's mods like SUDDEN+ and HS5 that go easy on all the "I love fast songs! I hate slow songs!" kids so I figured I'd make something to rage against that sort of world.
If you have any confidence in your skills, please play this song with no mods.
It's nice to play HS0, no mods every once in a while.
I don't know if it's a good idea to do that with this song though.

The song title came from
Turtle → green turtle → elephant turtle → sea turtle → soup → scary → ghost → something's mixed up in this → water turtle → water jug → Ganymede and the lonely magical banana.
It's the so-called solitary wit.
I hope to see you again next time.

For this song, the composer of Ganymede gave me a few keywords to focus on when designing the movie images.
So I decided to design the turtle as a mechanical being.


A Holy Beast once protected the land...
Archaeological digs suggested that the being was composed of technology that was not possible for that time.
The scene where the mecha was submerged in water was my visualization of the keywords, a scene representing the infinite universe.