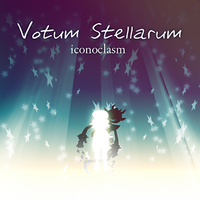 The wishes on the stars descend again now

This time my partner is wac.
wac, a fellow musician I talk about ideas with.
And wac, my occasional rival.

On the other hand, I've spent time with wac, eating and not eating.
We've walked back together when one of us didn't have enough fare for the train ride.
We've spent nights together, toasting each other with cans of beer and beating our own chests.

It's been two years since we created "Votum stellarum". Have we looked back much? I wonder if we've just run on ahead this whole time.
No, I don't think we've had the time to look back.
Now that I think of it, we've both come to places we'd never imagined we'd be in.

I wonder why that's the only thing I can think of when I think about this song now?

You could say we're somehow inseparable. It's truly a strange relationship.
I have to say I'm jealous of his talent. Even now, I have deep respect and awe for his music,
Which so superbly blends theory and emotion.

I dare you.
Thank you, my good friend.

Hmm, this is a little awkward.
Huh, I won't lose! I'll tear you apart!

You probably know this already, but this song was born of pop'n 10's "Wish on the Stars" project.
TAKA chose it among all the songs whose composers wished he'd choose.
I've never said this, but the truth is, around then, I was really hoping, "It'd be nice if he chose the idea for our collaboration". I already had my hands full with my own work at that point!

This is kind of an old story, but there was a time when I'd all but given up on making music and entering the world of games.
This world is already too much for me, and music and games are a nice hobby, but maybe I'd better start studying for my civil service examination ... That's all I could think. I even bought the study books.
TAKA was the one who did his best to convince me otherwise. He scolded me and encouraged me on, and even put our desks together in a row, trying to convince me to pursue the same goal with him.
It's thanks to TAKA that I remembered my dream of making music.
Even my becoming a sound director is probably thanks to TAKA, who walked that path before I did.

So, I figured there was no way he could turn down a request to do a song together.
Even my memories of the time around when we did this song are full of him saving me.
The loans that just kept on piling up. Dang. It's hard to think about.

Direction according to unyielding will and proper judgement. Musical production by extensive musicianship and a natural sense of music. And above all a sense of rhythm and tone.
I'm always staring at the guy who has all of these things I don't and almost drooling from jealousy. Dang. It's hard to think about.

We're junior and senior, equals, contractor and applicant, rivals in music and equipment, and office mates all rolled into one.
And, as usual, we're great friends.

Please play this song in a mood overflowing with that sort of friendship power.
We're iconoclasm. Tear down your icons. Smash, bang.

The wishes we cast to the stars become their voices and fall back down to earth.

Let's see.
I guess I had some favors to ask from TAKA, and a few came up while we were going home on the subway one day. This is how they turned out.
He was supposed to have lots of collaborations with people, but this is one of his first, and somehow it ended up being with me.

Come to think of it, we've known each other for a long time.
Something like, "Yeah, let's do something really moving."

So it's trance, yes? Great, let's talk about my feelings towards trance.
So I've never really listened closely to trance but this time I heard a lot of things for the first time.
I had lots of thoughts like, "Why Ibiza?" "What's the deal with progressive house?", but I'd never really bought any and listened too closely. That's the end of my hot feelings towards trance.

Anyway, I ended up being the one to decide on the chord progression. I ended up tossing over twenty versions of harmonies for the piano to TAKA. Even though I was just playing around with the piano, that's just what I would have expected from TAKA. It really ended up turning out as trance. That's awesome. He ended up being really useful. No, wait.
Well, it's over it's over this is great this is great this is really great~.

... I thought at the end and ended up going a little overboard ... oh well.

So, the time I spent working on this piece actually seemed to go by really fast
And it ended up being full of memories, that's really the power this song has ... I hope.
Especially since life is full of memories of me being a pain to TAKA ... I hope not.

Is it a one-time legend? Will we have this chance again? I don't know what the chances are for this unit, but
Hopefully we'll see you again sometime.

There were a lot of things about me in the feedback for "Wish on the Stars", but the one that stood out the most ...
"I want to see an orchestral trance fusion song by dj TAKA and wac."<ml> Come to think of it, we've been together for years, back when we were classmates together with our desks in a row;
I don't think I could have ever imagined we'd be together in a situation like this ...

It seems like we've always been good at the things that the other was bad at for a long time, so I wonder if a lot of things were just inevitable. So, we decided we should give it a try.

I started laying rhythms and phrases over the chord progressions wac had determined earlier, and in response to that, wac would come up with piano solos ... and we went on like that, but he came up with so many things I would have never thought of, so I think this was a really good collaborative effort.

It was a lot of fun, and we made something really great, so I'd definitely do this again if we could get the chance.
It'd be great to do this sort of thing with more people in the future, too.

Nice to meet you. I'm shio, and I usually do art for pop'n.
Since this is a pop'n crossover song, I was able to help out as best I could with my little ability.
A legendary collaboration by the sound directors of both series! Wouldn't it be great if you could play it on both machines at the same time?

This song came out of the "Wish on a Star!" project for pop'n 10.
Without the players' wishes, this song would never have come to this world, but here it is, thanks to the strange chances and probabilities of life.

Since I ended up being in charge of this song due to various circumstances, I wanted to do the type of movie only I could do; I wanted to do a video to kind of bridge the two series.
I wanted to mix the good parts and particular natures of pop'n and IIDX.
Of course, I wanted to do something that would fit well with the two composers' natures.
Since I'm greedy, I wanted to emphasize the best parts of both games.
But, I figured if I emphasized the pop'n part too much, it would step on the cool IIDX image too much ...
So I worried about things like that and eventually settled into something like this.
It fits in with the new songs from HAPPY SKY,
But it's nice that there's something here to make the pop'n players smile, too.

So, it's not quite as grandiose as Genesis,
But this is my own little anthem.
Thanks also to all the IIDX designers who generously gave me such good materials to work with.
It was fun to have a little VJ REMIX sort of movie come out of this project.
Thank you very much!

Doesn't it make sense that a DJ would perform the creation that makes him the god of the pop'n world?
This is how the stardust he gathers become new worlds and new life.

I'm so happy that everyone's feelings for pop'n could culminate in this sort of a wish on the stars.
Everybody's wishes were like the stars in the sky that you just can't count, and the song that came out of it is almost divinely beautiful. I really don't know what to say, it would be nice if that sort of gratitude could help me convey these shining feelings.

This may be the first time I've mentioned this, but MZD is based on the nice fellow who worked hard as a first-generation designer for pop'n. That's why he's god. When you stop to think that the little specks that had gathered around him have all turned into an enormous pop'n world, it's really amazing and beautiful, isn't it?

They all started out as small pieces, but when assembled, they become a great star. I tried to make a movie-like animation out of that idea.

I heard some ideas on what "anthem" means from both of them.
They grinned a lot, but they never told me anything. What ... what is it with you people?

Trance and a mysterious melody ... it's irresistable.

So this is what you get when you combine TAKA and wac. Hmm, only MZD would be fitting.

It feels like someone went "How about this!" and took a giant swing to send it out flying into outer space!

Hm, let's have a recital of dream idols, eh? It's just so great.

Hyaa. It's surprisingly serious. It's kind of sudden, but it's nice. We can do it special just for this time. It's good for a co-starring event of sound directors. Best friends are great.
It's full of the vastness of space and almost absent piano playing. You should listen to it with headphones. If you haven't bought the soundtrack yet, you should go buy it. Hm, this song is a little longer on the soundtrack, isn't it?

It's music for the ascension of a god! Feathers are falling down from the sky.

※ The notecount of this chart is different from the old 5-Buttons chart (total notes: 180).