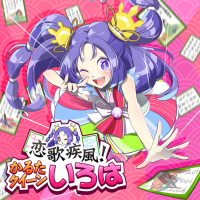 Zu-ba-ba-ba-baaam! It's Nukoneko-san~!
Is everyone having fun living a karuta life!?
Speaking of karuta, I used to own a set of karuta cards when I was younger, but I used to enjoy playing menko with them instead!
I always had trouble flipping the cards over!
It took me a few years to figure out the proper way of playing!
Huh, why did I play alone...? It's not because I didn't have anyone to play with! It's not!

Well, now I can play with Kuroneko-san! A battle with (all two members of) Nekomanma Team!

Zu-ba-ba-ba-baaam! It's Kuroneko-san.
Do all of you kids know how to play karuta?
This is a love song, definitely a love song.

One time I was distracted as usual, and had the passing idea of writing a song using the Hyakunin Isshu.
Then, suddenly, it was time to begin preparing for the next KAC.
Which meant I had to choose the queen of the pop'n girls division.
When I hear "queen", I think of karuta. Karuta Queen.
At that moment, everything came together; the competitive karuta queen Iroha suddenly burst into existence.
I never understood why they call the female champions queens even though it's a completely Japanese-styled game.
Well, it's probably because karuta originally came from Europe. But then, why are the male champions called meijin?

I'm probably the best competitive karuta player in the BEMANI world.
Because of all the reference material I've read about competitive karuta (a bunch of manga), I'm a bit of an expert on the subject.
I'm pretty much on the level of a champion already. Even though I've never actually played a game before.

The beginning of the song uses the usual introductory poem used in karuta tournaments, and the "zu-ba-ba-ba-baaam!" shout is based on the beginning syllables of each poem.
That's all the relevant karuta information I know.
By the way, why does everyone think the ending sounds like Nataradin?
To the trained ear of a competitive karuta player, she's clearly saying "this feels great".
Now, everyone can stop bringing up Nataradin.
(Acknowledged by Q-Mex)

The skills required in competitive karuta translate easily over to pop'n.
When writing the music, I wanted to create karuta-like hand movements.
If you decide to take on the rapid-fire hand movements of this song, it's a battle with Nekomanma Team for the title of karuta queen or meijin.
Ah, I've already forgotten all the poems. Try your best, Nukoneko-san.

Hellooooo~☆ It's the grieving squid.

Kuroneko-san's lyrics had a bunch of karuta-related phrases scattered throughout, which I thought was really clever, so I tried to include as much of that as possible in the movie!
While creating the video I kept in mind how excitable, lively, and expressive Iroha is. When I saw the official announcement from the pop'n team, I was surprised at how well everything came together.

It was the song from KAC pop'n women's division, and a song that the BeatStream champion wanted to see, so I poured all of that fighting spirit into creating the video...!
And chihi from the pop'n team illustrated the video as well! It's really wonderful!

Once again, I was asked to create a video.
Thank you!
I created a video which is just as high-tension as the song!
Be sure to pay attention to all of the karuta wordplay in the lyrics!

The pop'n women's finals song was invited to BeatStream.
Since I was bringing Iroha over from the pop'n team, Mimi and Nyami decided to tag along too! Sorry to intrude~
I was very happy to be in charge of illustrating the video, and when all the drawings were finished and I saw the video for the first time it really felt amazing!
My favourite illustration is Iroha dressed as NaN. This feels great~ ☆
I inserted a number of pop'n references into the video. If they caught anyone's attention, please go play the song in pop'n as well!
I'm very glad she was able to become friends with BisCo ^^
Iroha, love with all your heart~

Hello everyone! This is Karuta Queen Iroha, who filled the women's division with her cuteness.

At the beginning, the sound team suggested writing a song using the Hyakunin Isshu, which I was excited about.
The character's image is a blend between a Heian-era 12-layer kimono and a cutesy mini yukata.
Her design is very colourful, like many other éclale characters; but at one point the colouring shifted toward being more Heian-inspired. I think I ended up reaching a perfect balance between the two concepts!
At first I thought her miniskirt would make her look too lively to be a karuta player, but her song is already super lively! I feel great~!

wac was rather excited about writing a love song, but the character theme ended up being more focused on karuta than love!
Through her animations, please experience Iroha's burning passion for karuta.
At first I was worried, since the theme of Heian-era love seemed like a great idea; but when I considered Iroha's life, I realised that she's completely in love with karuta. It's a karuta-themed love song.

The reckless girl who loves karuta, who seems clumsy at first glance: Iroha.