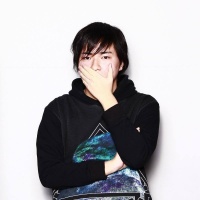 Masayoshi Iimori is a Japanese DJ and music producer popular for his trap music and his trademark heavy bass sound. He's a member of TREKKIE TRAX, a dance music net label based in Tokyo. Masayoshi caught the attention of many in the worldwide EDM scene, including renown musicians such as Skrillex and Diplo, with the release of his Break It EP, as well as his bootlegs of popular songs. He has played live at ULTRA JAPAN 2015 and has been featured on major EDM labels such as NEST HQ, Mad Decent, and Barong Family. His BEMANI debut was successful enough to earn him an appearance in the EDP×beatnation summit 2017 live event.

Masayoshi's sound has been characterized as a subversive style of bass music with an irregular flow, mixing in elements of electro, rave, minimal techno, tech dance, hardcore techno, and hardstyle/gabber. Many of his works utilize sounds and noises similar to that of Remo-con, DJ TECHNORCH, and teranoid, all artists that he is a big fan of. Through their recommendations to other artists, he's delved deeper into dance music and discovered a variety of sounds from across the globe, all playing a part in forming his current sound.