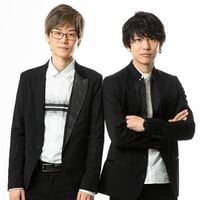 The primary hardstyle act from Japan, Massive New Krew is composed of Ryosuke Tachibana (known as just his surname) and Ayato Homma (known as JAVELIN). They own the Massive CircleZ label where they publish both hardstyle and non-hardstyle compilations featuring other artists. They're also members of the HARDCORE TANO*C label, composing tracks for compilations released under the label as well as often appearing in releases under labels owned by other TANO*C members like UOM Records and SKETCH UP! Recordings.

They didn't start off as such in 2008, but in 2010, their production shifted to almost exclusively composing hardstyle for a few years. Recently, they've been starting to branch out, producing psytrance, trap, and twerk, while hardstyle still remains as the foreground of their work. Their talent has been recognized both at home and overseas, invited to perform at the annual SYNERGY live event in the United States and even releasing a collaboration track with renowned Dutch hardstyle duo Psyko Punkz.

While many sets have been performed under the Massive New Krew name, the two aren't always seen together. Tachibana and JAVELIN have several solo works each under their own names, both doujin and commercial; Tachibana uses his real name, and JAVELIN uses "Ayato Shinozaki". Tachibana is a member of the GAT unit that focuses on non-hardcore genres, and JAVELIN himself is skilled at the drums, rocking them as a member of both ヒゲドライVAN (HigedriVAN) and 元気くんバンド (Genki-kun Band).

Currently, under their other aliases, Massive New Krew is affiliated to TOKYO LOGIC as business partners.