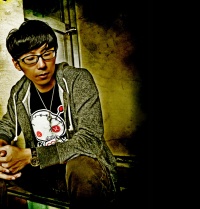 Shohei Uno, better known as RoughSketch, is a Japanese hardcore/gabber artist who started producing songs since 2004. He appears in almost every hardcore-based label, including HARDCORE TANO*C (who he is a member of) and X-Treme Hard. He's also very recognized in the overseas hardcore scene, where he has made appearances in various compilations.

Shohei Uno's label is Notebook Records and is a member of the IOSYS doujin circle under his uno alias. He composes happy hardcore songs under the DJ Laugh alias and he is also the composer for Rinkai Mosquito (臨界モスキー党).

Shohei Uno has become part of the beatnation Records label on April 10th, 2014, as L.E.D.'s choice, specifically under the RoughSketch alias.