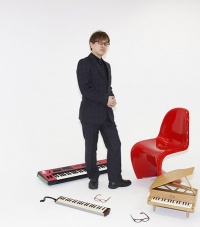 Yuuji Yoshizawa, whose main occupation before joining BEMANI was band support and piano teacher, made his debut in BEMANI as one of the two winners of the Boku mo Watashi mo pop'n Artist! (ボクもワタシも★ポップンアーティスト!) contest for pop'n music 20 fantasia and has since become a regular contributor to the series.

Yuuji has regularly appeared in the ノスタルジア series as well, mostly working on a handful of the piano covers for the series.