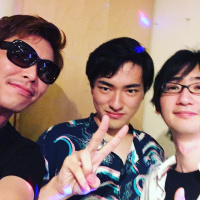 Yooh is a music producer and a frequent contributor to SOUND VOLTEX, making his debut in the series as one of the winners of the KAC2012 Original Song Contest. He is known to collaborate often with BlackY and siromaru, both in and out of BEMANI.

While in BEMANI his songs are mainly trance and renaissance/gothic in theme, outside of BEMANI he mostly focuses on EDM, house, dubstep, drum'n'bass, hardcore, and other genres. His earlier appearances in the doujin scene were mostly relegated to labels featuring other SOUND VOLTEX artists such as RTTF Records and Movement on the FLOOR, but lately he's been making several appearances in popular doujin labels such as Massive CircleZ, C.H.S, Diverse System, and even HARDCORE TANO*C. He owns the Yoohsic Roomz doujin label, where he self-publishes his own albums.