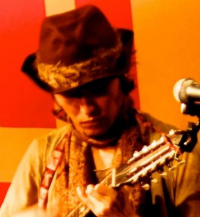 Tomoaki Hirono is an in-house KONAMI composer, who, in his early days with the company, worked on games such as the Jikkyou Powerful Pro Yakyuu series (alongside Naoyuki Sato), Power Pro Kun Pocket series, Juukou Senki Bullet Battlers, and Bouken Jidai Katsugeki Goemon. He was involved in band activities prior to joining KONAMI.

Alongside his appearance in pop'n music 17 THE MOVIE, Tomoaki started using "Gekidan Record" (劇団レコード) as his main alias for "ethnical, melancholic, melodious" songs. The alias came from combining two of his favorite things: theater ("gekidan" is the word for "troupe" or "theater" in Japanese) and record.

Aside from music and theater, Tomoaki's other interest is art; he has in recent years been drawing his own jacket illustrations for his GITADORA songs.