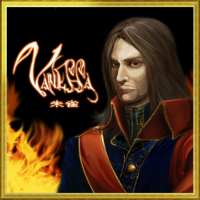 There is enough separation between "mental anguish" and normality.

The melody is divided between left and right as if to echo his thoughts full of hypocrisy.

He was seen as a "moralist" but suffered as a "hypocrite." His ultimate fate will be welcome to him!

He was so obsessed with the idea of noble life that he suffered sadly for it.
A portrait called Earl Vanessa portrays the grief that dwells with him.

In 1845, the painting, which had the bottom half burnt during the war, was restored.

Currently, the painting is kept at a particular museum.
There seems to be a strange event, where a burnt ash pile gathers under his portrait.