This page is for the KONAMI original song titled reunion. For the jubeat plus license song of the same title by ClariS, please see reunion. 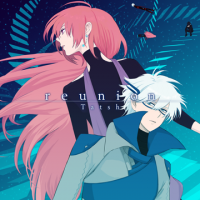 I have been quiet for a while.
Tatsh here. I've been gone for a while.
For a while, I produced many beatmania IIDX tracks.
When I left IIDX, the songs in IIDX kept coming and evolving.
Making songs and condensing them to two minutes was always a hard task for me.

I put a variety of thoughts and ideas into this piece.
All music shows the intentions of the artist, so for this song, I wanted to put a serious effort into making this.

I chose the title of this song out of many other choices.
I felt the title would convey a positive feeling for this song.

I got a lot of e-mails congratulating me after the song was announced at the location test on the official blog.
In my musical career, this was one of my happiest moments.
Thank you all very much. (TAT)/

When I wanted to leave the music world, a lot of people gave me encouragement and convinced me to stay.
And now I feel very happy.
And after all this time, I feel that I now have been reunited.

With this song, we have the long awaited reemergence of Killer and Licht.

Wandering through the labyrinth of time, they stumble across each other again and again.

I remember drawing these two from memory.