This page is for the international release of REFLEC BEAT for iOS, titled REFLEC BEAT +. For the Japanese version, please see REFLEC BEAT plus. 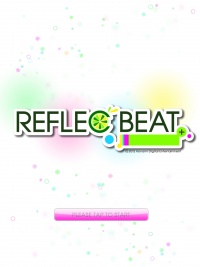 Main screen of REFLEC BEAT +, as of the limelight update.

REFLEC BEAT + is a mobile installment of the REFLEC BEAT series for the iPad, iPhone and iPod touch, and the first installment outside of Japan. Much like jukebeat, it is available for free on the App Store, with song packs available through in-app purchase. Downloadable packs cost $3.99 / £2.49.

(For consistency's sake, songs' titles are written out as they appear on the official REFLEC BEAT + store.)

This page lists all songs that have been added to the game. Unlike its Japanese counterpart, no licensed song packs nor gift songs has ever been released for REFLEC BEAT +.

For a list of KONAMI original songs that were never added from REFLEC BEAT plus, please see this page.