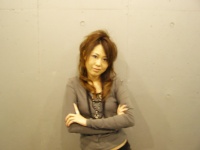 Not to be confused with GuitarFreaks & DrumMania vocalist Junko Terashima.

Junko Karashima was a long-time artist for BEMANI. She joined back in 2002 in DDRMAX2 -DanceDanceRevolution 7thMIX-, moving up in the series to becoming head sound director of DanceDanceRevolution SuperNOVA, as well as several of the HOTTEST PARTY entries. She is best known for her group songs under the TЁЯRA alias alongside Naoki Maeda. She also wrote lyrics for a few of Naoki's songs outside of said alias, including at least two for his J-POP group BeForU.

Junko left KONAMI in 2013 alongside Naoki Maeda. Similar to Naoki, most jackets and videos appearances of her were removed from BEMANI games; their TËЯRA profile was also removed from the BEMANI Fan Site's artist listing.

After Junko left KONAMI, she wrote new songs for CAPCOM's CROSS×BEATS series produced by Naoki Maeda, until the series' end in 2018. Shortly after, she went dormant on social media.