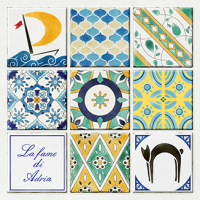 Roaring at the whisper of time, I feel your thoughts in Adria's wind