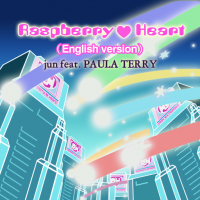 This song first appeared on pop'n music 10 as an instrumental version about a year ago.
So, what has happened in a year?


As a matter of fact, I've been surprised the most at the success of this song.
I really am appreciative to everyone for this.


So, for the English version, Paula Terry did the singing.
I remember NAOKI's introduction for both of us (Laughs)
Paula said that she was happy to do this, especially since it was a cold day outside.
I sang the song to give her an idea of how the song went, and she soon followed along.
We both sang well together.
... After a while, we both completed the song.
Do you think that this song has Paula's touch to it?
The vocals for me were changed a bit, so it sounds a bit more adult.


Incidentally, beatmania IIDX lists me as one of the composers for this song.
This is the second song that I have put in IIDX, after Sweet Sweet ♥ Magic
... The thing is, for both songs, I've been credited as just jun (laughs). But I do appreciate this.
If you do come to play, play these songs in a row. (laughs)
This song will make you feel happy and warm during the cold winter.

beatmania IIDX difficulty rated 1 to 8+ in IIDX RED, and from 1 to 12 from HAPPY SKY onwards.
DanceDanceRevolution difficulty from 1 to 10 from DDRMAX2 to SuperNOVA2, and 1 to 20 from X onwards. (Ratings and notecounts obtained from BEMANIWiki 2nd.)