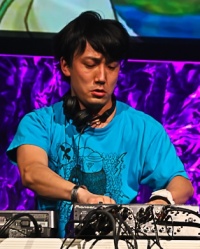 Shinsuke Shimamura is a Japanese hardcore artist and DJ who started producing songs since 2000. Considered as one of the pioneers of the J-Core scene, he appears in many doujin releases and in international hardcore compilations. DJ Shimamura's record label is DYNASTY RECORDS and he's also a guest member of the HARDCORE TANO*C circle.

His musical style is reminiscent of rave, being hardcore rave his speciality. He also does gabber and drum'n'bass.