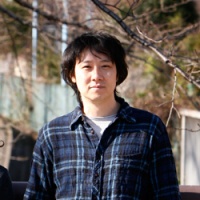 Toshihiro Mizuno is an artist part of MOMO Records. He first appeared in BEMANI in pop'n music 11, and is best known for his various pop'n music songs sung by his wife Akino. He's also done a few solo songs, and occasionally has lent his vocals on a few others. He has also appeared on the guitar for songs composed by in-house BEMANI artist wac.

All these albums are under the ROMANTIC PRODUCTION label.