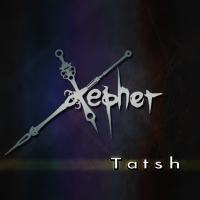 The music that was born from my own world has expanded even farther thanks to the movies of our designer, Maya. I hope that the world of "Xepher" expands again thanks to your play next. In that spirit, I gave the song a title beginning with the letter signifying the unknown, "X".

For the choir in this song, we decided on Junko Hirata from platoniX as well as Natori Yumi from the gospel world. I certainly hope you will pay close attention to the singing as well.

I've been fighting to expand the world of Tatsh's "Xepher" even further since the demo stage. "It's not this", "it's not that" ...

Xepher really began to take its hold on me when I was entrusted with the lyrics. There isn't very much singing in the song, but there was actually a very long rough draft of the lyrics. Tatsh took parts of it and came up with the actual lyrics for the song. If possible, I don't want to hang "Xepher" to death with concrete words. I believe you can get an interpretation of my Xepher through the lyrics on the G2ARTS works, which were one of the candidates for the final lyrics.

You who have issued forth your love,
Look to the sky in this world of madness
Now, your eyes should be here, eyes that never fade away
But you don't know anything

I wonder when it began?
I wonder where we may go to visit with the end?

The stars that you sheltered invite you towards their repose, but
You don't know anything about how
The stars that tear and devour in this newly-birthed hatred
Will become your poison, and scorch your body

The sins of the morning spill over into the evening and dirty the night
Where are you, whom we called the sky?

That girl is the key to washing away the sin
Walking together, you can discover the weight of that sin

Scorched by the hatred of the past, you released the fire
Your own screams invited the sin, sneering
You cannot return to where you were anymore

Your heart begins to fade away under the influence of the serpent that wanders the sky;
It collected your light and made it unclear
The battle continues, dancing in and between the sky
And the pain continues as well

You melted me in the morning, we spoke in the evening, you loved me in the night
You came close to me in the night, when we called you the sky
And committed a great sin
Your unrewarded existence will turn everything into nothing