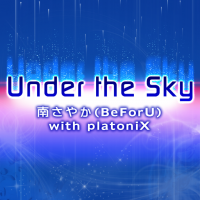 Under the Sky's jacket.

I'm not a DJ, a remixer, or an arranger.
As a composer, I want to convey the feelings I placed into a song.
"A song where I can express a bit of my feelings"
I hope you like it.

The image of HAPPYSKY is exactly encapsulated in Tatsh's song, and I fell in love with the lyrics of "Under the Sky" written by JunkoHirata.
I thought these two people from "platoniX" were a great pair.

Sayaka Minami was able to appear together with platoniX in IIDX, which made me very happy.
Whenever you're having a bad day, or feeling worried and uneasy, this song will refresh you!!
Please enjoy the refreshing taste of HAPPY SKY (o^-^o)♪

This MOVIE was made from the request "Please make it using secret live footage".
I find live filming to always be exciting since they cannot allow for any reshoots or mistakes.
There is no Tatsh cut this time, with the problem that "I was not out of it" m(>_<m)
I quickly attempted to connect the video of another song. That sounds familiar, right?

Although the song is called "Under the Sky", the live video caused the footage to be pitch black, so I cut-in some sky images to give the impression of a "live performance in the sky!"