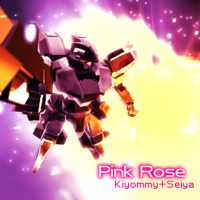 It's fiiiiiinaaaaalllly in IIDX! Hi, I'm Seiya Murai, the "Seiya" of Kiyommy+Seiya. This song, Pink Rose, made its debut in KEYBOARDMANIA 3rdMIX, then went from pop'n to DDR to IIDX. It's been five years since its 2000 debut, but I hope you can love it all the same. It'd be nice if I could make another song for IIDX next time, like a business card exchange♪

"Pink Rose" by Kiyommy + Seiya is a new dance song from the land of the rising sun. Featuring melodic synths, driving rhythms and Japanese pop vocals, fans of this genre will want to order a full dozen of this rose.

Five years pass, and it makes it into IIDX. KEYBOARDMANIA movies were at a 4:3 aspect ratio, so I had to do some tuning to get it into IIDX. The expansion was pretty straightforward overall, and I was able to add bits of image and speed lines to add to the impression of motion. By the way, if you miss a note, the video gets all noisy, like you're taking damage.

※ The notecount of this chart is different from the old 5-Buttons chart (total notes: 149).