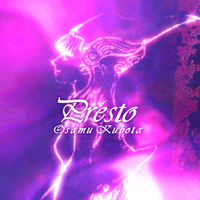 Long before we had received this work from an acquaintance of the musician, Osamu Kubota had already proven himself as a very skilled musician. Even though the length and experience of his career far outweighs that of mine, we've still managed to become close friends.
His music production primarily involves a lot of orchestra and jazz taste, and he's become quite famous, acting as a musical director for a certain famous TV drama and other such things.
Now, Kubota's music has cultivated a completely new, fresh genre in beatmania. It's very unique in its essence, much more than what I asked from him. With that, this sole song became a symbol of the direction of 3rd style.
Isn't it such a wonderful piece of music? The harpsichord, classical piano, church organ and so on, all of the elements give off a very baroque feeling. Everyone, please enjoy this magnificent fusion of styles to your heart's content.

Beginning like an old movie with scratches on the film, this movie is the kind of movie you're used to seeing IIDX in on a regular basis. Even the staff was like, "Ooh! It's a progressive world with a whole new medieval flavor. From the beginning, we had planned to collaborate with the designers, but we hit a dead end when GOLI and I were only able to prepare one piece of material each.

It stayed that way until just before production was up, and I thought, "I might not make it! I've come to a situation where I can't make it, but I've been able to create and process materials, and VJ YUZ did a great job with the editing in just one day. The movie is created in a very presto style (a speed motto in music terminology, meaning "very fast"), but it also conveys the passionate, fast-paced development of the song's visuals.

※ This chart is different from its later console appearance (total notes: 222).