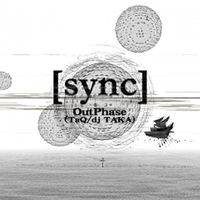 The meaning of "OutPhase" is "opposite phase", as it displays maximum power when the cycles coincide. It becomes about cooperation rather than individual emphasis.
It's a scale which can't be expressed as a single scene from a game where songs last less than two minutes.
When two opposing forces synchronize with each other, self-control isn't guaranteed to be preserved when energy is present.
We brought a revolution to IIDX, and are now surpassing beatmania as OutPhase.

The super special unit "OutPhase", who everyone was waiting for, arrived at the right time.
One of OutPhase's musical roots is considered to be German trance, which peaked in popularity in 1992~1993.
Inheriting that gene, the song "sync" was born after evolving into its most ideal form, without being affected by reckless management of the passage of time.
Inside a laboratory called "OutPhase", the two composers engaged in production activities and continued their collaborative research each day and night without sleep to give birth to the evolutionary life form "sync", and the image of these two passionate young genius researchers still left a strong impression on me.

※ This BEGINNER chart is different from its later console appearance (total notes: 403).