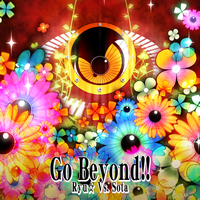 At the Akihabara event, this was most definitely decided. This is gonna be huge!! "BPM"200 was our most important element here, but we wanted to incorparate an orchestral and trance stylized approach. We wanted it to be enjoyable to a large group of people. If you like this song, give us a shout, by all means!

Thanks a lot, everyone!
It's this time around again that I, Ryu☆ appear again.
This is the time that I got to collaborate a song with Sota Fujimori, and we're both really proud.

When I was having a talk with some people over some "Chinese meat dinner", my partner was decided. However, there are times when you are delighted when you get surprised with something like this, but then you end up getting all nervous and worked up.
This was one of those times!

Well, sometimes you can't just take the easy way and you skip to the "tough, rough storm" part!

Doing the part where he had to get the idea of the song, we had to keep progressing on how the music will be produce. Sota gave me some of the sounds and parts of the song, but it was hard to edit it to the point of our satisfaction, and we had to keep trying over and over to replace what we didn't like.
For the beats and orchestration of the first portion of the song, Sota came up with some ideas to go with mine, and placed them over my sounds. It ended up to become a track that sounds very good!
In my own little job, I tried capturing the essence from "Aurora" so that it's stylized at some parts of the song.

"Go Beyond!!" If it's something you guys will enjoy, I will be very honored.

This is the first time I've ever had to make a movie for the "IIDX" series, it's an honor!
With the video having to be finished with the same time as the song was, it made me a little nervous, but at the end, it turned out to be alright and very pleasant!

"Go Beyond!!" is truly the image and the title for this song, and for the concept, it was truly "to run off to the other side, beyond our limitations".
The vital force of the song is the plant; when there are beats, it rushes at high speed, and forcibly constructs beauty into the new world.
Yet with such little representation, it's kind of grown onto the song. For me, even when I've made something of little significance, I hope it can delight all of you out there.