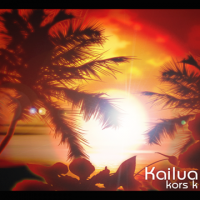 It just happened that the request was made just before I went to Hawaii for a DJ gig, so I was able to take some pictures and get some inspiration for the song.
(It was a bit funny that the day after I took the pictures, I had to return home)

On the day I went to Kailua, I went to the beach of the same name.
Anyways, it was so beautiful that I wondered whether I was in a dream or in reality, and I feel that it was one of the best places I have been.

So when Munetica and I went to the DJ concert, she said "You should make a song based on your Hawaiian experience", so the genre is partially based upon my memories of Hawaii (laughs)

I do think for a kors k song, this one has a great opening.
Everyone in Kailua, Hawaii, please play this song!

When I think of Hawaii, I think of a beautiful tanned woman, lying underneath an umbrella, wearing nice sunglasses and drinking juice...
For me, Fukutomi WAVE, this thought was the first one in my mind, but in reality, much of the Hawaiian culture still remains rooted in mystery, but it is still a beautiful place.

Coincidentally, I went to Hawaii last year and went to Kailua beach, which became the title for this song.

The clear blue sea, illuminated with light.
The cloudless sky, all the way to the horizon. The glistening white sand beach.
The scene was so beautiful that no travel brochure or picture in Japan could describe it.

I imagined the natural beauty of Kailua along with the setting sun to create the movie for the song Kailua.
Please enjoy this.

(As an aside, I enjoyed the sun a little too much while there and got a bad scabby sunburn on the top of my head)