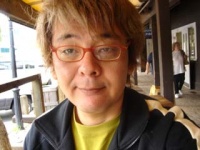 Tsugumi Kataoka is mostly known as being the former composer and arranger for Parquets, with Manami Fujino on the vocals, who he worked with both in and out of BEMANI from 1992 to 2009.

Tsugumi has also composed music for other artists, like Hideo Suwa, Sanae Shintani and Sachiko Sugawara. He also composes instrumental music for the pop'n music series, and even performs some of his own songs.