Not to be confused with ∀. 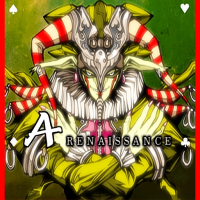 The A in the title is for the trump card, the ace.

To tell you the truth, I first got the basic idea for this song around 3rd style. A song that starts at about half speed and has lots of complex chords that requires precision sight-reading, then breaks out into a drum'n'bass rhythm with a stream of 16-notes on the piano part. You'd play it with both hands to hit the scattered notes coming down, then for the part with the scales and the scratch, you might perhaps develop the musical technique necessary to mimic an actual performance of such a scale ... well, it was requested that I make a song kind of like that, as it happens, that would force a player to use all of their skill to perform.

However, at the time we felt that the level of this song might provide too high a hurdle for the typical player, so we waited for them to mature as the different versions of IIDX came and went and the level of the game's difficulty steadily rose. When we saw how good people had gotten at spontaneously reading patterns during the 7th location test, we were confident it was the right time to release this song.

This time I've taken the name "D.J.Amuro" from the "A" of the song title. I hope you can feel all the thoughts and memories I've packed into this song.

You have unlocked the song "A" by D.J. Amuro. Don't let the simple song title fool you, "A" is a brilliant masterpiece that features classical inspired melodies mixed with an edgy drum'n'bass line to deliver an over the top intense song. Experience the power of "A" - its awesome and amazing!

This is the last song we worked on visuals for. Since it was delivered to the visual production team in the final stages of development, we didn't think we'd have time to do a movie or even key animation for it. But we thought it's such a great song, we have to do something for it ... and so the pressure kept building up to finish something. I couldn't face Amuro-san with a total failure, after all *g* So, this is the song we did the quickest work for, next to ZERO-ONE.