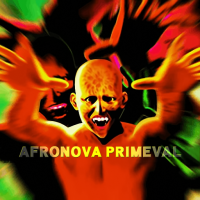 A hot tribal techno inspired by the souls of a race! Maybe it is natural to want to dance!?

Debuting on DanceDanceRevolution KONAMIX, "AFRONOVA PRIMEVAL" is a more upbeat remix of the original tribal song.
The "AFRONOVA" series will always be recognized as the first tribal song to appear in the game and continues to remain a fan favorite.

Out of all the popular songs in DDR, there was an especially high demand to bring over AFRONOVA, which finally makes its debut.
This high-speed tribal track is like a madly dancing primitive cyberethnic tribe.

OO is a popular character from DDR.
Even though it was my first time encountering him, I had him appear a lot as the main character.
Playing off of the song's title, I added silhouettes of someone's afro coming off.
Check out the silhouette right after it happens!
(Shoutouts to everyone on the DDR team!)

I was familiar with the song, since it was a DDR crossover, so I took the liberty of getting to play around with the chart.
I ended up submitting more requests relating to the movie than the chart or anything else.
"The bald guy! Put the bald guy in!"
I expect a hundred people across the country to want to raise their arms and not hit any of the keys.
INSIDETHEBAGISACHOCOBANANA- （ノ＾＾）ノ

Not only is the song a crossover from DDR, they also brought over that one character.
I mean, I did ask CHOBI. to have him show up.
Look forward to seeing him pop up at all of the important points.
What a funny movie.
Oh yeah, the miss animations are casual and interesting.
The better you are at the game, the less of a chance you'll be seeing them, but do check them out sometime.
CHOCOTTOBAREBARECHOCOBANANA- （；＾＾） (← That's how I hear it anyway!)

These charts are identical to the Single charts.