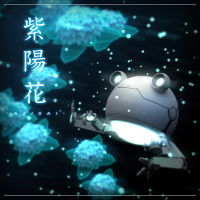 One day L.E.D. asked "Do you want to collaborate with Camellia?", and I immediately answered "YES!".
Since Camellia and I have talked about make a song together beforehand, it was right on time, and thanks to L.E.D. our goal was achieved.
The order for this song was to be made with a rainy season motif, so in addition to the aggressive sound, I made a lot of clear sounds like rain.
The opening bell sound is one of favorites using the polyphony modulation function of Prophet 5.
I also incorporated an alternating and complex Wobble on the first half, while the solo of the second half I made it sound like a fight of two locations, and it ended being a song that can be enjoyed both in game as well on its own.
Please try playing this song. Thank you.

This time I collaborated with Expander, a.k.a. senior Sota Fujimori.
Previously, when I collaborated with Nekomata, Akhuta, S-C-U, 96, and Sota in "Cleopatrysm",
I thought about collaborating with Sota, who recommended me to beatnation RHYZE! So I'm really, really happy to realize it!

I first made a rough draft and sent it, then Sota sent it back to me, I was impressed by the maniac creation of the melody and the fine sequence of his signature sounds!
Especially the solo in the latter half is Sota as its finest, and when I thought about the back-and-forth phrase... I took my hat off.

Regarding the song, we had to work with the theme of "rainy season" of Season Line, also the "Asian cyber" theme troubled me, so the oriental techdance was made by trial and error.
The vivid sound of Sota matched well, creating an atmosphere of an electronic Hydrangea that blooms in Toyo's cyber space!
It was a very pleasant collaboration that made me study, I just finally finished it, but also I want to collaborate again.

I will be glad if you can survive this song during the rainy season!
Camellia out.

Although the moist feeling of the rainy season is not very comfortable,
I like the sound of rain and the darker clouds, so it would be nice if I could express the atmosphere of those clouds? What is it, ribbit.
The charts have a quite high difficulty, ribbit. Blow off the rainy season with sweaty scratch! Achoa!!

Character name: Tsuyuta
A self-styled fighter who enjoys fighting games.
When it begins to rain, he starts to squat reflexively. He goes to his knees about 10 times.
His favorite foods are soba and milk. The rumor on the neighborhood is that he hits his own soba.