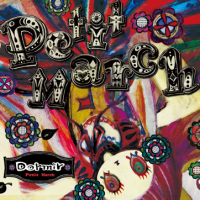 This is my fourth collaboration song that I have participated in, but in the past three, I was closely involved in the production and creative direction of the song. This time, crimm and TOMOSUKE (as DORMIR) took a different approach to the song, which created some tension, but we functioned well with each other.
Originally, TOMOSUKE and I were going to collaborate with other musicians for the PS2 version of DJT, but the major success of denjin-k (still on sale!!!!) prompted others to pair us two together for this song.
But I feel that this collaboration is something that was surprisingly very good, and I feel that we will collaborate together again in more games.

This is about a sparkly and graphic adventure of three little characters coming from a wonderful world.
"Dynamism" and "cute" would be the most appropriate words to define this trip. Also, the sweet and vivid colors are going to immerge you in this magical musical dimension in a smooth way.

Making a pop-flavored video for the first time was a challenge for me. I had to make do helping the other two and contributing as much as I could. I felt bad, but at least the video was pretty. We talked back and forth about the video for a while.