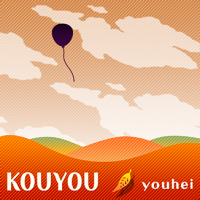 5 or 6 years ago I made a ton of flute songs. This was one of them.
When I made the song, I imagined a landscape of open fields and crimson mountain ranges surrounded by falling leaves, which simply moved me.
How did the imagery come across to you?

Not every song that appears on the final stage has a high difficulty level...
This movie is filled to the brim with the staff's emotions, and in a way is experimental and exciting.